The seventh guest post in the series of contributions by OKCon 2013 speakers is by Matthew Todd, who will host a satellite event entitled ‘Is Open Source Drug Discovery Practical?’ in the Open Science and Research programme on Thursday 19 September from 09:00 – 12:00 at the World Health Organization (WHO) – UNAIDS HQ, room D46031. Please register to attend here. Find instructions about how to get there below. 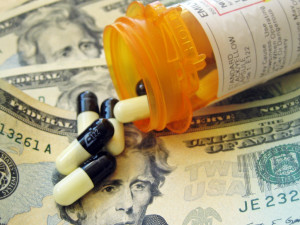 If we value collaboration as a way of speeding scientific progress, we should all embrace open science since it promises to supercharge the collaboration process, both by making data available to anyone but also by allowing anyone to work on a problem. Open science can obviously promise this because of its essential and defining condition: openness. We, as humans, default to this way of interacting with each other, but such norms can be overridden where there is some advantage in keeping secrets. A possible advantage might be financial, meaning there may be an incentive to work in a closed way if something one has done can be capitalized on for financial reward, leading to the idea of “intellectual property” and its protection through patents.

So we appear to have two opposing forms of enquiry. One that is open (without patents) and one that is closed. Clearly there are examples of great things arising from both.

One of the areas of science that has been of late dominated by the private sector is the pharmaceutical industry. Many effective medicines have been developed using the current model, but is it the only way? Might drug discovery that aligns with open source principles be possible?

My lab has been involved in trying to answer this question, both in developing ways to improve how we make medicines and how we discover new ones. The latter project, Open Source Malaria, directly challenges the idea that something new and of potential value to health should be sequestered away from public involvement. The OSM project abandons the protection of intellectual property so we may take advantage of the greatest number of people working on the problem in a barrierless, meritocratic collaboration.

There are historical arguments that patents are not necessary to drug discovery. Therapeutics of great value have been developed without patents, such as penicillin and the polio vaccine. The ability to patent molecular structures (rather than the methods used to make them) is a relatively recent invention. Patents have been accused of allowing companies to innovate less frequently.

But is an open approach really possible for the development of a new drug? Who would pay for the clinical trials? Who would invest money in the medicine if there is no monopoly on selling it downstream? Is there a realistic economic model that can take a promising new therapeutic and turn it into a medicine for treating millions of people? If open drug discovery is possible for diseases such as malaria, where there is little prospect of a profit, can the same model be applied to a disease like cancer, or Alzheimer’s, where the predicted profit would be very high under the current model?

These questions will all be addressed at a session I am hosting at the Open Knowledge Conference. This satellite event, taking place on the Thursday, is entitled “Is Open Source Drug Discovery Practical?“. I am very excited to have assembled a highly knowledgeable panel to discuss these issues, and in some ways it is lucky that OKCon is taking place in Geneva, where so many of the people most relevant to the current method of finding new medicines are located. The speakers are from the World Health Organisation, the Medicines for Malaria Venture, the Drugs for Neglected Diseases Initiative, GlaxoSmithKline, the World Intellectual Property Organisation and the Structural Genomics Consortium. If anyone is able to answer the session’s main question, these speakers can.

These panel members will have 10 minutes to speak about their organization’s efforts related to a more open approach to drug discovery. We will then have some coffee, and then turn to addressing some of the key questions above. There will be ample chance for members of the audience to take an active role in the discussion. If you are interested in the quandary of how we are going to find the drugs that we most need for the coming generations, and how we might be able to use open data and open research to do that, then this session is for you. The subject is so interesting because the discovery of effective new medicines is very hard: we assume, then, that the best way to do the research is using a massively distributed collaboration with lots of open data, yet that model is a real challenge today because of the structures we have put in place to support the industry.

Please join us! The session will take place at WHO’s main headquarters from 09:00 till 12:00. Please register to attend here, where you will also find more detail of the specific items for discussion and the panel members.

Location: Initially sign in at the WHO main building then go across to the WHO-UNAIDS building, meeting room D46031 (take lift 33/34 to go to the 4th floor).

Instructions on getting to WHO by public transport

Mat Todd was born in Manchester, England. He obtained his PhD in organic chemistry from Cambridge University in 1999, was a Wellcome Trust postdoc at The University of California, Berkeley, a college fellow back at Cambridge University, a lecturer at Queen Mary, University of London and since 2005 has been at the School of Chemistry, The University of Sydney.
His research interests include the development of new ways to make molecules, particularly how to make chiral molecules with new catalysts. He is also interested in making metal complexes that do unusual things when they meet biological molecules or metal ions. His lab motto is “To make the right molecule in the right place at the right time”, and his students are currently trying to work out what this means.
He has a significant interest in open science, and how it may be used to accelerate research, with particular emphasis on open source discovery of drugs and catalysts. He is Chair of The Synaptic Leap, a nonprofit dedicated to open biomedical research, and currently leads the Open Source Malaria consortium. In 2011 he was awarded a NSW Scientist of the Year award in the Emerging Research category for his work in open science. He is on the Editorial Boards of PLoS One, Chemistry Central Journal and ChemistryOpen. He is a Sydney Ambassador of the Open Knowledge Foundation.